I am trying to draft this week’s blog entry while playing legos with Kai when I hear the cry. Jessica has just returned from her garden where she went to thin the plant-threatening weeds. “Daisy! She’s up in the field, licking something small and brown on the grass!”

I leap into action. We have been waiting for this moment. I slip Leif into the sling, grab Kai’s hand, and with Kyra and Jessica, stride up the hill. Of course, Daisy picked the farthest and most remote corner of our hillside pasture. 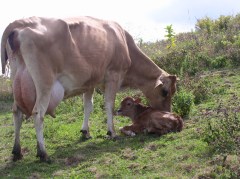 I see them from a far, mother and babe! It is here! I had checked a couple of hours earlier. Daisy is fast! Lucky her.

We draw near. Daisy hovers protectively. Our other cows circle with interest. The steers graze calmly further down the hill. While Daisy is usually as sweet as her name, we don’t want to risk a charging cow. We stop yards away and gaze. You know how new mothers can be. Dasiy doesn’t need us, obviously. However, we do want to make sure the young one gets Daisy’s colostrum during those first vital hours when its stomachs (yes, plural) are extra able to absorb the early milk’s rich nutrients.

I send Jessica close. Bull or heifer? Can you tell? We want to know.

It’s a bull. A pang shoots through my heart. Ah well. Who knows what will happen to him. Breeder, ox, or meat? At this point we focus on his cuteness. He is so cute!

We watch as he struggles to his legs. Daisy circles him, placing her head between him and the electrified wires that bound their pasture. Good mom. Then, just as the calf starts heading for her udder, Auntie Precious comes along to give him a friendly nudge, and the calf goes sprawling to the ground. 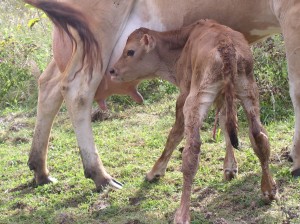 Daisy steps daintily and firmly between her calf and Precious. A few minutes later, he is up again, and this time an eager Dandelion, Daisy’s first child, swoops in from the side to see, and again he is tumbling, legs like tossed pick up sticks. The steers are now approaching, sniffing with curiosity. Daisy moos persistently. Her udder is so full that her teats are sticking out sideways. I am sure she can’t wait for him to nurse.

I decide that we have to help. Jessica hikes back to the barn for a lead rope, bucket and bottle. We loop the rope over Precious and tie her to a nearby tree. I hand the Leif-laden sling to Jessica and take the bucket. Daisy is sensitive at first. Every time I touch her udder she swats me with her hind leg. I finally hold her leg back with my left shoulder while pulling on one front teat with my right hand. Slowly slowly the stream begins, so golden that it is practically orange! (Someone has to explain to me how the beta carotene in bright green grass makes milk peach-y.)

Daisy settles down and lets me pull. She obviously feels the relief. Meanwhile the calf is nibbling at my side. Not me, little one! I want to be the missing link.

The bucket begins to fill. When I have more than I want to lose, I stop, grab the bottle, and begin pouring from bucket to bottle. Colostrum spills over the edges and every which way, thick and sticky. 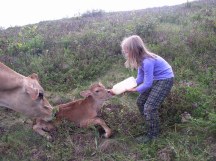 Finally the bottle is half full—a quart. I begin feeding the calf as Daisy noses the empty bucket. He is sucking! I hand the bottle to Kyra, take the sling from Jessica, who then takes the bottle from Kyra, to feed the (still unnamed) baby bull (hereafter “B.B.”) the last few drops. Bottle empty, we begin again. I give the Leif-filled sling to Jessica, take the bucket and start milking.

We give B.B. a second quart. He is getting the hang of the bottle.

We hear a car in the driveway. Geoff and Jordan are finally home from school (the rest of us are home schooling this year). Jordan! Daisy is his cow. I stride down to greet them. Daisy needs water; she is thirsty. Jordan fills two large buckets and we walk together back up the hill. He is walking with those heavy buckets as quickly as I am. “It’s what you call love,” he says.

A moment later I watch as Jordan’s face explodes into a smile at the sight of his calf. He scratches B.B. under the chin, and then goes to work. He is the milking expert. Minutes later he has another bottle going. Lucky calf!

I return to the house, smiling. Time to finish my blog.

Today B.B. is steady on those peg legs. His large brown eyes gaze expectantly, waiting for all the sticky sweet things life has in store for him. We are waiting too!

By next week, we’ll be “in the milk” again, and I’ll post what I was writing earlier.