The baby chicks we hatched a few years ago were born pecking with a ferocity that left them panting. Minutes tucked into the warmth under mother’s wing and the fluffed-out fledglings were pecking again, this time adapting their freedom-finding moves in pursuit of food and water.

When Dandi, our Jersey heifer, first landed on the barn floor, she rested in a calf curl while her mother, Daisy, licked her free of her birth sac, stimulating her spinal chord and nerve networks to fire and wire. Within an hour, Dandi was struggling to stand on wobbly legs made for walking, ready to reach for the all-nourishing colostrum raining down from above.

Leif is now nine weeks. He can’t feed himself. He can’t stand and walk. But he can smile. Could his smiling be as essential for his survival?
*

Yesterday morning, as usual, Kai woke up and ran into our room. He used to beg to snuggle between Geoff and me. Now he only has eyes for Leif. He wiggles in next to “the baby” and watches. I am aware, but dozing.

I look at Kai looking at Leif. Leif is smiling at him with a wide gummy grin. Kai is smiling back, lured into the land of the super smiles by his little brother. Kai glows. Cuteness indeed.
*
I have been trying to catch those super smiles on film. Leif’s features run so quickly through a range of emotional expressions that it is largely a question of luck whether or not I succeed. His smiles explode across his face and disappear, only to return a fraction of a second later, launched in a new direction, at a different angle, with a different color. It would help if I had a faster lens, but the surprises are fun too. I just keep clicking. 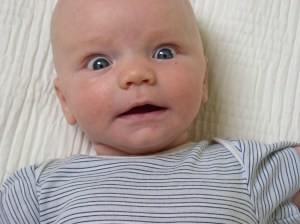 I ponder what the camera catches. Leif seems to have a complete set of feeling states, each tuned with dazzling detail. So too, this collection of muscular patterns not only fashion his face, each one arranges his every cell, every limb. No moment of his bodily self is left out. Smiling, for Leif, is a full-bodied activity. His arms wave, his legs pump, his torso curls in a “C” that begs to be snuggled.

Of course, his first smiles were simply ways to register his internal state of being. He wasn’t trying to communicate or respond to anyone. His smile was who he was in that moment; the relaxing and spreading of facial muscles, the pulling outward from the corners of his mouth was his existential condition. It was what his world was doing and feeling, and doing in order to feel. Often his eyes were tightly shut and still he smiled. His smiling extended and amplified his sensation, enabling him to know what he was feeling and who he is. 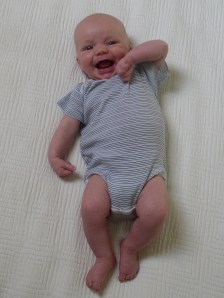 Now his smiles are different. He smiles in response to external stimuli—visual sensations—most notably, the appearing of a face. Somehow he is now connecting the appearance of a Face with an anticipated change to his world that that smiling is for him. He will be cradled, burped, fed. The Face will smile at him. So he waits, already patient. Smiling, he is making time exist for himself.

His smile is a sign, a first abstraction, but its meaning is not conceptual. It is kinetic. The smile and the sensation it represents are linked by the movement they share—the movement of pleasure-becoming. The movement of smiling itself releases the discomfort of discomfort, allowing us to believe in a world that exists for our pleasure.

Moreover, his smile not only signals his anticipation of what will happen. It is an effective move in making sure that what might happen happens. His smile is a call—a call to connect with him, to care about him, to want more of his smiles for ourselves. For his smile is contagious. Delight delivered. We smile back, unable not to reflect the pure joy beaming back at us. Smiling he works to create the relationships he needs to ensure that someone will respond to him.

That someone will hear his cry. 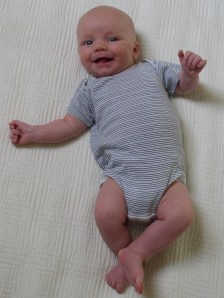 Smiling, he participates in the rhythms of his own bodily becoming, creating patterns of sensation and response that will help him secure what he needs to thrive.

Smiling, he moves his whole bodily self in ways that align with the trajectories of his best becoming, creating relationships that will support him in unfolding what he has to give.

Past Posts by Date