I  live in Washington County, New York, a rural holdout four hours north of New York City. It is a place between suburb and wilderness, strip mall and mountain side, where people’s livelihood is often heavily dependent on the whims and webs of the natural world. It is farm country—dairy farms, beef farms, vegetable farms. It is a place whose woods and meadows teem with deer and wild turkey; and whose beaver ponds are favorite watering holes for migrating geese. 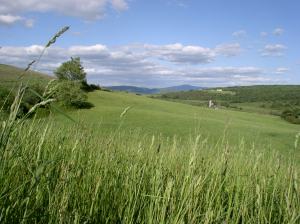 It is a place where people love their guns.

After living here for seven years, I am beginning to appreciate why. In this place between, guns have a role to play in sustaining a mutually life-enabling balance between domestic and wild.

No doubt about it. Most of the natural beauty in these valleys belies a human touch. Rock walls ringing grassy meadows testify to years of labor, human and animal. The animals that graze the hillsides and populate the barns–cattle, chickens, horses, pigs, dogs, and cats–have evolved in tandem with humans to depend on us as much as we depend on them. The plant that fills most fields each summer is genetically engineered corn. Most of the trees growing here are less than a hundred years old.

In this between, humans rely on guns to help them control the impact of their own presence on the local wilderness. Farms and grain, chickens and corn provide high concentrations of food for deer and foxes, groundhogs and skunks whose natural predators are no longer roaming the area. Humans use guns to help protect the environment for human use and for animal use.

Even avid hunters appreciate the logic. Around here, it is often those most enamored with bagging a buck who are most adamant about posting “no hunting” signs around woodlands, protecting tracts of wilderness from development, and ensuring the ongoing health and fertility of the deer herds. I have never seen one farmer friend more angry than when he suspected some young locals of shooting a doe. “No does!” he protested.

On what basis, then, should guns be controlled?

What is a gun anyway?

A gun is a delivery mechanism. It is tool for hurling very small objects very quickly through space to precise locations. A gun delivers a powerful punch. A colossal release of pent-up potential. It is a channel for a human impulse to connect, to matter, to mean. It is target practice—a way of getting what you want when and where you want it. It is way to control. To conquer. A gun moves. It colonizes desire, making us want what it can do.

A gun’s primary mission is to kill living creatures. Whether hunter, farmer, soldier, police officer, or self-defending citizen, the aim of the gun is to disseminate power—the power of an individual. It is a way to assert your life over and against the life of another. Do or die.

Are guns bad because they kill?

I am a pacifist. I am a vegetarian. I have no interest in owning a gun or in hurting any form of life. Yet I also know that despite my best intentions, I do. I kill. I routinely stake out my claim to life. I kill the plants that threaten to choke my tomato seedlings. I kill the flies and ladybugs that swarm in my kitchen. I kill the wasps clinging to the ceiling above my children’s bed. I raise cats to kill the rats that eat the chicken grain. I know that every food I eat and every piece of clothing I wear requires that something somewhere other than me die in order for it grow, take shape, and make its way to me.

Should I despair? I could, but to do so would be horribly selfish. For, even as I kill to live, I give life to countless other creatures, animal and plant, microscopic to macroscopic, that depend on me to survive. I am an ecosystem of my own, teeming with life.

I cannot object to guns because they kill. I cannot pretend that I do not. Yet I can ask questions about how killing occurs and why. I can ask about the kind of ongoing life and lives that killing enables.

A gun packs a huge capacity to harm and protect, to maim and let live. How do we help ensure that it does one rather than the other?

Here there are grounds for control. As a tool capable of causing grave harm to multiple others, gun use can and should be regulated. In this country, there is ample precedent for restricting the use of such objects.

Take motor vehicles as an example. If you want to drive a car, you need to take a course, obtain a permit, practice with an experienced driver, pass a driving test, get a license, regularly renew it, and always act in ways that ensure the safety of others, else run the risk of losing your license.

Yet there is no public outcry to get rid of licensing procedures for vehicle use. We don’t perceive the licensing process as an infringement of our freedom. We know how important it is for our own safety to make sure that other people drive safely.

Why should it be different with guns? Why should the government not guide their use so as to ensure the safety of others?

I talked about gun control just last week with the man who comes to inseminate our cows. When a cow of ours goes into heat, we have no bull to do the job. Even if born and raised with human touch, bulls remain wild and unpredictable. They are possessive of their cows and dangerous to have around, especially with kids. So when a cow of ours is ready to breed, we call on our artificial inseminator, who arrives with his truck of frozen sperm. The cows don’t seem to mind.

This man has lived his whole life in the area. He grew up with guns. His eight-year old grandson has his first 22. He is for gun control.

As he told me, “People can have their guns,” he said. “The question is what kind.” In his opinion, no hunter worth his or her salt needs a magazine cartridge with more than four rounds. As he put it: “If you have to shoot more than four times, it got away.” In other words: You missed.

He left me with a refrain that keeps echoing through my mind—the one rule for using guns that he is teaching his grandson just as his grandfather taught him. “You shoot it, you eat it.”