My fourteen-year-old son hates homework. It’s not the work per se. During school hours, Jordan is happy to learn and will lecture at length on fine points of modern history or the properties of an equilateral triangle. Give him the same assignments at home, however, and he perceives them as an intrusion of his time and space. An injustice. 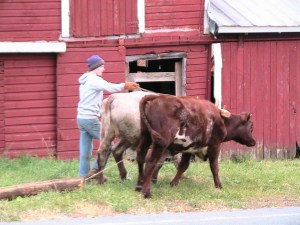 Home, he reasons, is for other kinds of work. Home is for milking his cow, Daisy, and planting potatoes. It is for chopping down a tree with an ax whose handle he carved, and then using Bright and Blaze, his team of young steer, trained to a yoke he shaped and shaved, to pull the log into the barn, where he and his sisters will hack it into firewood. Home is for churning cream he skims, from milk he squeezed, into butter and ice cream (though not both at once).

While school is for schoolwork, home is for home-work.
*
The question of education is in the news, running alongside concerns about the United States’ ability to sustain its place in the evolving global economy. We are familiar with the refrain: innovation, creativity, and entrepreneurship will secure us jobs. Schools must teach the next generation these essential survival skills.

So far so good. The next question, of course, is how? Can you even teach creativity? The oxymoron is evident. Some deny that it is possible. But what does it take to be a creative, innovative entrepreneur?

For one, it takes the perspective required to see a problem as a problem in the first place, independent of what others think. It takes the passion of wanting to do it better. It takes the patience to wait for ideas to come and mature, and the persistence to brook the resistance new ways inevitably elicit.

In short, if we want to nurture creative problem-solvers, we need to help kids develop an intrinsic desire to unfold what they have to give in making the world a better place to be.

Did I say it would be easy?
*
I recently read NutureShock, a book about parenting practices that unmasks our common sense ideas as not so sensible after all. One chapter focuses on theories about how to develop the “executive functions” of the prefrontal cortex that aid us in planning for the future, carrying out strategies, and harnessing our impulses to them. These executive functions are almost always described as a top-down kind of self-control: mind over body. Until recently, the road to such skills has been paved with training that focuses primarily on the intellect.

However, as NutureShock relates, the balance is shifting, for researchers are discovering more effective means of developing these skills. Project-based, case-driven, collaborative learning opportunities are being proposed in which students design, carry out, and even assess their own work. When students learn what they need in order to solve a problem, they know that what they are learning matters. They know why. They care, and so invest more of themselves in learning.

In the preschool years, such learning is called imaginative play. Ask a four-year-old to sit still and you may get thirty seconds. Tell him that he is a dragon guarding a precious jewel and you might get four minutes. Involve a jewel thief, a dragon family who loves the jewel, and the magic rainbow it opens, and he may sit for twenty.

The same logic works for a twenty-year-old. Put her in a life-like situation, and see how learning disciplines improve. Why? Those so-called executive functions are fueled and funded by our emotional, sensory selves. It’s not so mind over body after all.

If our aim, then, is to nurture passionate, patient, persistent problem-solvers, the plot thickens: how do we teach our kids to play?
*
I am learning with Leif again. Master of rolling that he has become, he no longer needs to pull his knees to his chest to initiate the move. He simply twists his torso, belly button first, and rolls to the side, hauling his legs behind him. He learned this torso twist because the leg-lifting, jack-knife move he practiced so many times arranged his body in this pattern, pulling it into his sensory awareness as a possibility. He learned it, he perfected it. Now, this corkscrew is his move of choice as soon as you lie him down, for example, when attempting to change his clothes or a diaper. 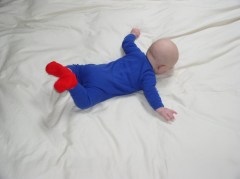 Once on his belly, however, he finds himself again at the horizon of his abilities. Stuck. He tries arching his back and lifting his arms and legs off the floor, waving and kicking, while making the sound of a strangled cat.

Then, after several moments of ear-scratching screech, he resorts to that same knees-up pattern of movement that taught him how to roll in the first place: he pulls his knobby knees up under his body. Lo and behold he finds his toes. They connect with the floor. Executing his usual downward push, something unusual happens: he finds himself launched forward in space, at the edge of his blanket, forehead to the floor. Wow! 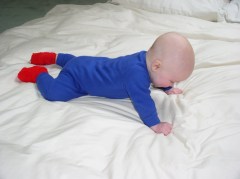 What’s happening? Faced with a new challenge (belly down), Leif mobilizes a pattern of sensation and response he already knows how to make (knees up). When he does, the familiar pattern takes a different shape in relation to gravity and weight (toes connect). He learns about him self and his world based on what happens when he makes it (face to floor). The pattern evolves (a bit more up). He repeats the experiment again and again, playing with the possibilities, and hones in on those patterns of movement that unfold his potential to move some more (he’s almost crawling!). The movement Leif is making is his making him.

While the spinal movements Leif is making are basic to human health–at the core of yoga, dance, and other physical disciplines, overlooked to our detriment in our sedentary lives–what’s even more important about Leif’s adventures is the process he is engaging. He’s playing in the most fundamental way we humans can: discovering and creating the patterns of sensation and response that make him who he is. He is not just moving, he is exploring and unfolding his potential to make new moves. He is playing at his own horizons and doing so because it is fun. He is participating in the rhythms of his bodily becoming.
*
To survive in this century, we are going to need to learn to make new moves in relation to the most basic elements of our ongoing existence–food, water, air, earth, and its human and animal creatures. We need to be able to play–to envision, plan, and carry out scenarios that anticipate the impacts of our actions on the health and well being of the earth in us and around us. What are we creating?

We might think that once we learn the basics of rolling, sitting, crawling and walking, it is time to restrict the focus of learning to our intellects. However, for our thinking to remain free, flexible, and responsive to our time, we need exercises that challenge our intellects as well as bodily practices that call our attention to how our movements are making us. To respond to the challenges we face, we have to care. We have to know why it matters to our bodily lives, and to do either, we need to move in ways that bring our senses to life.

Bright and Blaze may not know it. They are not just pulling a log. They are pulling into existence a passionate, patient, persistent problem-solver.

Past Posts by Date