We have been having a lovely holiday week here at the farm. For Christmas, Santa brought a huge new wheel barrow filled with tools: a pitchfork and manure shovel, a feed bucket for Marvin and a water bucket for the chickens, and a new 75 foot section of hose. We even had our periodic thaw to help us with water transport!

Then there are the calves. A few days ago, Jordan walks into the house at the end of chore time, obviously frustrated. “I am beginning to question Blaze’s intelligence,” he quips.

“Well, he refuses to drink from a bucket! I even tied him up and put the bucket right in front of him, and he just stands there–obviously hungry–and moos.” Jordan sighs. “He won’t drink from the bucket unless I put my fingers in there so he can suck on them.” I now see Jordan’s dripping hand. Meanwhile, Bright happily slurps his quotient of Daisy milk from a bucket without a fuss.

So what is with Blaze?

I have some sympathy for the little creature. It is not the easiest transition to make. A calf is born wanting to suck, head up, preferably on some soft and resilient oblong protrusion that hangs from the sky and dispenses sweet warmth. The sucking motion in this tipped-up position is beneficial. It stimulates the salivary glands and aids digestion; exercises head and neck muscles; and connects the calf with a source of heat and protection: mom. I imagine Blaze asking: So what’s this puddle in pail?

I think back to what I have written in What a Body Knows (and sketched on April 1 in this blog): nurture and nourish are forever entwined. Perhaps it is no different for cattle. It is not merely milk that Blaze wants. He wants to suck. He wants to nuzzle. He wants his mom.

“I don’t think it is a problem to feed him on a bottle for a while,” I suggest.

“But it isn’t convenient,” Jordan replies. “It is hard to hold the bottle for Blaze while giving the bucket to Bright. It would be so much easier if he just drank from a bucket!” I recognize this logic all too well. Parenting by convenience. Oh how I know! Still, I also know that a calf, like a child, is a force of nature. If you oppose it, even if you win, you lose. Jordan knows too. 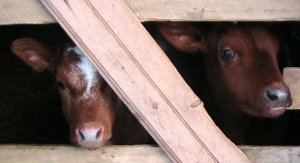 *
Meanwhile, I am still wrestling with calf care issues of my own–related to the kids and their ability to work together (see Dec 17). I am still seeing faces that pout and hearing voices that complain of being left out.

The Family Council I described in the last post had been highly successful as far as it went. We had worked out a framework for a different way of thinking: our calf-caring team. We had staged a shift to a more harmonious way of being. Yet feeling that shift and making it happen was proving another matter.

In our councils, the format is simple. Each person has a chance to speak. More than that, each person has a chance to be heard by the very persons who are provoking concern. In that hearing, I guide the listeners to mirror the speakers–restate what the person said, don’t respond, just say it again, let them know that you really get what they are saying. It is a basic relationship tool for enhancing communication. And it works. You can see the tension melt from young shoulders who feel finally released, finally heard.

But hearing only goes so far. A shift towards resolution needs to occur, and it does when persons involved recognize that they share a common desire. In this case, it was obvious to the kids. They each wanted the calves; they wanted the calves to be healthy and happy and well tended; they wanted to be the ones to help. In the end, after everyone shared and was heard, the kids could see, even without my prodding, that they all wanted the same thing: to be recognized by the others as an important, necessary, and effective member of the calf-caring team.

It wasn’t quite enough. I too had to tug and release. Tug and release. I had to give the kids time to get used to the idea. To feel it. To live it. So we kept talking.

As the week progressed, we realized more: it has to do with trust. Building trust. Blaze has to learn to trust Jordan. The kids have to learn to trust one another–really trust each other to want what they say they want. Let it sink in. So we work on that trust. Tug and release. Letting it be real.
*
A couple of days later, Jordan and Jessica come in together at the end of chores, smiling broadly. “Blaze did it!” Jordan announces.

“He drank from the bucket!” Jessica adds.

“Perhaps he is intelligent after all,” Jordan grins. I never had any doubts.

“These calves are teaching me patience,” Jordan adds with a triumphant sigh.

Happy New Year to All!

2 thoughts on “Bottle to Bucket”